Elvis Presley played a Native American for the second time in his career in the musical comedy Stay Away, Joe, based on a best-selling book by Dan Cushman. This time, however, instead of being a relevant commentary on prejudice -- as was the superior Flaming Star -- the film stereotypes American Indians as shiftless and irresponsible.

Elvis stars as rodeo rider Joe Lightcloud, a Navajo whose family still lives on the reservation. Joe persuades his congressman to give him 20 heifers and a prize bull so he and his father, played by Burgess Meredith, can prove that the Navajos can successfully raise cattle on the reservation. If their experiment is successful, then the government will help all the Navajo people. But Joe's buddy accidentally barbecues the prize bull, while Joe sells the heifers to buy plumbing and other home improvements for his stepmother, portrayed by Katy Jurado. Former leading lady Joan Blondell appears as tavern owner Glenda Callahan, whose daughter, played by Quentin Dean, can't seem to stay away from the girl-chasing Joe. 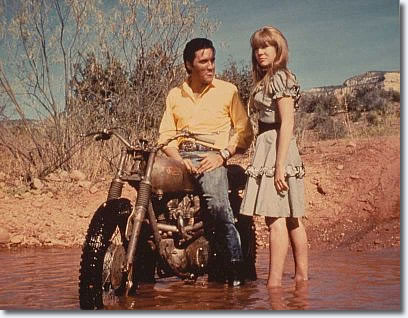 Elvis and Quentin Dean in Stay Away, Joe

On October 1, 1967, Elvis recorded the songs 'Stay Away, Joe', 'All I Needed Was The Rain' and 'Dominick'. Elvis hated the song 'Dominick', which he was to sing to a bull. He made producer Felton Jarvis promise that it would never appear on a record. Since the movie called for only three songs, this would be the first time in Elvis' movie career that there would not be a soundtrack album or EP released along with the film. MGM and Elvis' manager Colonel Tom Parker decided to have Elvis record another song that could be played over the opening credits and released as a single. The song 'Stay Away' was written by Sid Tepper and Roy C. Bennett and based on the melody of the song 'Greensleeves'. Elvis recorded it January 16, 1968 and it was released as the B-side of a single along with 'U.S. Male'. 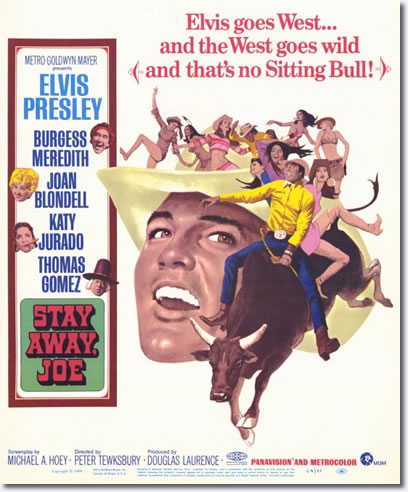 'Stay Away, Joe' was filmed in the Arizona town of Sedona and it was one of the rare times that Elvis' wife Priscilla and the wives of his entourage attended a location shoot. They left Memphis on October 26, 1967. Meanwhile, back home, Elvis' interest in horse ranching was losing its luster and there was an auction held at Elvis' Circle G Ranch on November 4, 1967 to dispose of the equipment that was no longer needed.

Filming began in Sedona and Cottonwood, Arizona on October 9, 1967. Location filming continued until November 22, 1967 when the production company moved back to the studio to finish the production. The movie wrapped on November 27, 1967 with a lunch Elvis had catered for the cast and crew. Elvis entourage members Joe Esposito and Charlie Hodge each had small roles. After Elvis was released from the movie, Joe, Charlie and fellow entourage member Marvin 'Gee Gee' Gambill went to Las Vegas to vacation before returning to Memphis. 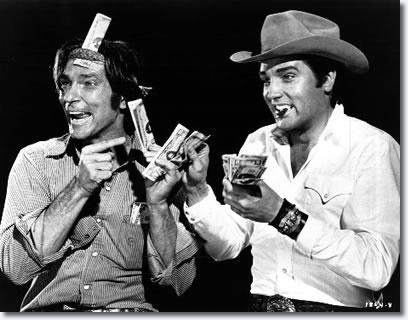 The movie was based on the best-selling novel by award winning author Dan Cushman.

The novel became the Book-of-the-Month Club selection for April 1953. Mr. Cushman based his book on his own native Montana where, after graduating from college, he first became a prospector and geologist before becoming a writer of over thirty novels and winning a number of writing awards. The novel became the basis for both a Broadway musical and Elvis' movie and all three were both praised for their hilarious comedy as well as panned for their negative depiction of Native Americans.

The cast for 'Stay Away Joe' was anchored by several longtime actors including Burgess Meredith, who played Charlie Lightcloud, the Native American father to Elvis' character Joe Lightcloud. Educated at Amherst, Burgess Meredith became a stage actor in New York in 1933 before serving as a Captain in the U.S. Army Air Force in World War II. After the war he turned to making movies until the late 1950s when, as a liberal thinker, he was blacklisted from films due to Senator Joseph McCarthy and the McCarthy hearings targeting Hollywood. In the 1960s the raspy voiced actor was able to find work again and became known for his role as 'The Penguin' - a villain in the 'Batman' television series. He also was the voice for many years for Skippy Peanut Butter commercials. He was nominated a number of times for Academy Awards and Emmy Awards.

Mexican actress Katy Jurado played Annie Lightcloud. She was an award winning actress in her native Mexico as well as having received accolades in the U.S. from both the Golden Globes and the Academy Awards. She gained over 20 pounds for her role of Annie and just before filming she broke her foot. She had her cast removed prematurely and thus she walked with a limp in the movie.

Thomas Gomez, known for playing brooding heavies, played Grandpa. He had not planned on an acting career, however, after graduating from school in 1923 he answered a help wanted ad that lead him to become a part of a traveling theater group. He was nominated for an Academy Award in 1948 for his supporting role in 'Ride The Pink Horse'. He served more than 40 years on the board of directors of the Screen Actors Guild. His last film was the 1970 release 'Beneath the Planet of the Apes'.

Veteran actress Joan Blondell played Glenda Callahan. Known as the big-eyed, wisecracking blonde, Ms. Blondell was born into Vaudeville and toured with her parents, performing from the age of 3. Debuting with the Ziegfeld Follies in New York, she began her Broadway career which lead her to star with James Cagney on Broadway as well as in six films. Eventually she married actor Dick Powell and they worked together in ten musicals. Later, divorced from Dick Powell, she was married for a time to producer Michael Todd. She received an Academy Award nomination for the 1951 film 'The Blue Veil' and two Golden Globe nominations for her supporting roles in 'The Cincinnati Kid' and 'Opening Night'. Her TV credits include roles on the series 'Here Come the Brides', 'The Real McCoys' and 'Banyon'.

Character actress Anne Seymour played the Lightcloud family's much anticipated guest Mrs. Hawkins. Ms. Seymour was a part of the seventh generation of actors in a theatrical family that began acting in Ireland in 1740. Her two older brothers were writer James Seymour and actor John Seymour. After making her Broadway debut in 1928, she became a radio heroine playing 'Mary Marlin' and other such roles in radio dramas of the day. She made her film debut in the 1949 release 'All The King's Men'.

Young Quentin Dean played Mamie Callahan. She had debuted in the 1967 film 'In The Heat of The Night', winning a Golden Globe nomination for her supporting role. Her career included three movies in 1968 including her role in 'Stay Away Joe' as well as a handful of TV guest appearances.

Susan Trustman made her movie debut in 'Stay Away, Joe' playing bank teller Mary Lightcloud. She went on the have a regular role as Pat Matthews on the daytime TV drama 'Another World'.

Dick Wilson played the befuddled car salesman stuck with Joe Lightcloud's horse as trade-in for a shiny convertible. He had many roles on TV and became a familiar face on shows such as 'Hogan's Heroes', 'Bewitched', 'Ben Casey', 'Checkmate' and 'Maverick'. However, Americans might remember him best as 'Mr. Whipple' in Charmin tissue commercials - a role he had for 25 years.

Burt Kennedy and Michael A. Hoey adapted the book for the screenplay. Mr. Kennedy began performing as a child with his parents. A decorated WWII veteran, he used his Army training to become a stunt fencer in films, then eventually began writing scripts for TV and movies specializing in westerns.

Peter Tewksbury was the director and would also direct Elvis in 'The Trouble With Girls'. He had previously received Emmy nominations and awards for directing the TV series 'Father Knows Best' and 'My Three Sons'.

All I Needed Was The Rain

Lovely Mamie was performed by Elvis Presley - Short ditty with guitar. Unreleased by RCA until later on the Elvis Double Features CD Kissin' Cousins/Clambake/Stay Away Joe (1993)