Fast cars are not nearly as dangerous for Mike as beautiful women, all of whom want to race him down the aisle to marriage. Les, played by perky Deborah Walley, works as the drummer in Mike's band, and she is extremely jealous of his attention toward other women. Also vying for Mike's affection is sophisticated Cynthia Foxhugh, played by Shelley Fabares, who is the daughter of wealthy auto magnate Howard Foxhugh. Finally, representing the intellectual type is writer Diana St. Clair, played by Diane McBain, who falls in love with Mike while finishing her book The Perfect American Male.

In an ending that seems to mock Elvis films in general, Mike does not end up marrying any of these women. Instead, he succeeds in wedding them to friends and associates, while he remains free to begin a new romance.

This film began with the working title of 'Never Say Yes'. In January 1966 producer Joe Pasternak asked Elvis' manager Tom Parker if he had any suggestions for a better title. Parker came up with 'Jim Dandy' and 'Clambake'. Other titles considered were 'Never Say No','Never Say Yes' and 'After Midnight'. In Britain it was finally released as 'California Holiday', while in the U.S. they ended up using 'Spinout' and saving 'Clambake' to use for a later film. 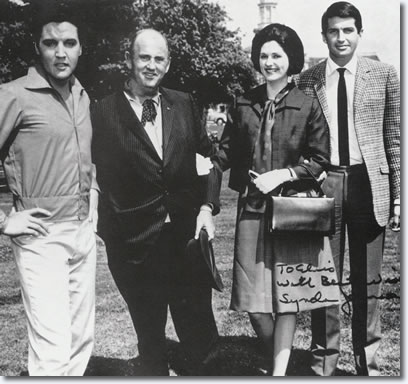 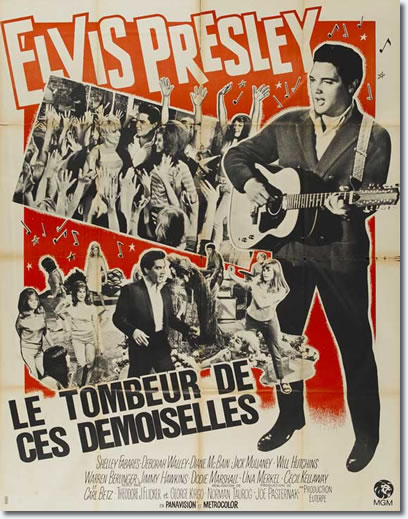 On January 30, 1966 Elvis and his entourage left Memphis in his Dodge motor home and headed to California. Soon after arriving Elvis gifted his new toy, a Sony video camera and recorder, to director Norman Taurog. Personal video equipment was new on the market and relatively hard to come by.

Elvis reported for film pre-production on February 11, 1966 and for soundtrack recording on the 16th. Famed vehicle customizer George Barris was almost finished customizing Elvis' new bus. A bit impatient to try it out, Elvis took it on a trial spin to Las Vegas that weekend.

Principal photography for 'Spinout' began on February 21, 1966. During the shooting of this film Elvis told a reporter that he wanted to do another gospel album. He had in fact been working on new music at home with entourage members Charlie Hodge and Red West. His latest inspiration had come from folk singers Peter, Paul and Mary and Odetta singing songs written by Bob Dylan. He also told the reporter that he would always keep Graceland because of the memory of his late mother.

Principal photography finished on April 8, 1966 and Elvis drove his new bus home to Memphis. The movie opened on November 23, 1966. Theaters sponsored 'The Perfect American Male Essay Contest' as a way to promote the movie. It was a play on the character Diana St. Clair's book and the best essays won Elvis records as prizes. Radio stations received promos of the 'Spinout' single and prerecorded open-ended interviews with Shelley Fabares, Deborah Walley and Dian McBain. The film was the 57th highest grossing film for the year. Elvis was the tenth highest paid actor in 1966.

Shelley Fabares was one of Elvis' favorite leading ladies. This film marked the second of three movies that they made together. She went on to receive two Emmy Award nominations for her long-time role on the TV series 'Coach'. 'Spinout' reunited Ms. Fabares with two of her previous co-stars from the popular TV series 'The Donna Reed Show' - Carl Betz and Jimmy Hawkins.

Carl Betz had played Fabares's character's father Dr. Alex Stone on 'The Donna Reed Show' and in this film he played her character's father Howard Foxhugh. Betz, a graduate of Carnegie Tech. (today known Carnegie Mellon), played in the 1938 Sugar Bowl football game and made his acting debut on stage. He received an Emmy Award in 1969 for his TV series 'Judd For The Defense'. Jimmy Hawkins, who played Larry in 'Spinout' and had played Doc in Elvis' movie 'Girl Happy', was also a co-star of Fabares's on 'The Donna Reed Show'. He began acting as a child and had the role of Tagg Oakley on the 'Annie Oakley' TV series. He might be best known as Tommy Bailey in the film 'It's A Wonderful Life'. Location shooting for 'Spinout' took place at the Los Angles Dodgers Baseball Stadium as well as Ascot Motor Car Racing Ground. Over 200 extras were used for the Sante Fe Road Race scene. Elvis' character drove a classic 1929 Duesenberg to tow his race car around. 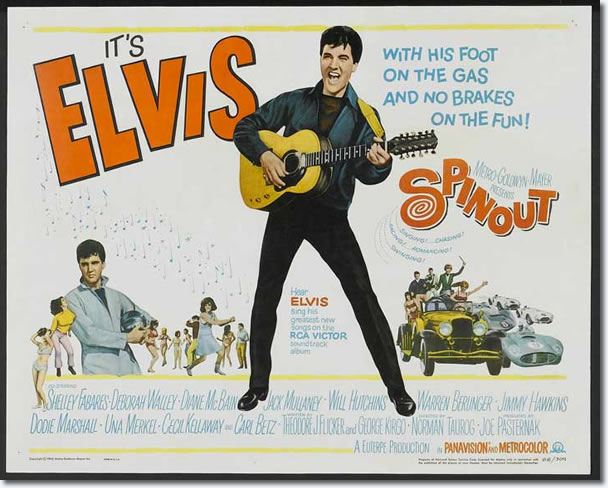 There were, as usual for an Elvis movie, a number of lovely actresses who had bit parts in this film. Among them was a very young Rita Wilson, who would go on to be a movie star and a film producer.

Diane McBain, who played author Diana St. Clair, started her career as a teenage model. She has played in a number of TV series including 'Surfside Six' and today continues to perform on television and in films.

Deborah Walley portrayed drummer Les. She was the daughter of Ice Capades skating stars and started her career skating with her parents at the age of three. Known for her perky roles as Gidget and other beach movie characters, in the 1970s she moved to Arizona to raise her family.

Will Hutchins, best known for his lead role as Tom 'Surgarfoot' Brewster on television in the late 1950s, played Lt. Tracy Richards in 'Spinout' and worked again with Elvis in the 1967 film 'Clambake'. He was at one time married to comedian Carol Burnett's younger sister Chris. Jack Mullaney, often cast as the goofy sidekick, played musician Curly in 'Spinout'. He had played Elvis' buddy in the movie 'Tickle Me'.

Cecil Kellaway, who played Bernard Ranley in 'Spinout', was known for his many character roles, two of which garnered him Academy Award nominations.

Una Merkel, who played Violet Ranley, was a veteran character actor who began her career as a stand-in for Lillian Gish in the 1920s. She was nominated for an Academy Award in 1962 for the film 'Summer and Smoke' and she won a Tony Award in 1956 for the Broadway show 'The Ponder Heart'. 'Spinout' was her last film.

The story was written by Theodore J. Flicker and George Kirgo.

Theodore J. Flicker was a director for TV series such as 'The Andy Griffith Show', 'The Man From U.N.C.L.E.' and 'I Dream of Jeannie' when he also began to write scripts. He went on to be nominated for Best Written American Screenplay by the Writer's Guild for the 1968 work 'The President's Analyst'.

'Spinout' was produced by Joe Pasternak, who had also produced Elvis' film 'Girl Happy'. His credits include four Academy Award nominations and ten Golden Laurel Awards. The associate producer was Hank Moonjean, who had been an assistant director on the Elvis film 'Jailhouse Rock'. He went on to receive a 1989 Oscar nomination for Best Picture for producing 'Dangerous Liaisons'. The director was Norman Taurog, who was one of Elvis' favorites to work with.

Choreographer Jack Baker had worked with Elvis on 'It Happened At The World's Fair' and later worked with him on 'Live A Little, Love A Little'.

All That I Am

Dolores Fuller went into a collaborative partnership with Ben Weisman and got one song, 'Rock-A-Hula Baby', into Blue Hawaii, a beginning that eventually led to Elvis recording a dozen of her songs.

A Whole Lotta Shakin' Goin' On at Dodger Stadium