Elvis' twenty-seventh movie was the 1968 MGM car racing film 'Speedway'. Elvis Presley, Nancy Sinatra and Bill Bixby costar in a musical comedy that features Elvis as stock-car champion Steve Grayson, a generous soul who is always sharing his winnings with people in need.

Partly due to his generosity and partly because of his manager's love of gambling, Steve finds himself owing the government back taxes.

Sinatra costars as IRS agent Susan Jacks, while Bixby plays his bumbling manager, Kenny Donford. Susan attempts to put Steve on a budget that will allow him to pay off the government in instalments. Steve tries to soften the all-business agent with romance and music, but she thinks him frivolous and irresponsible. But her tune changes when she realizes that Steve's latest charity case is a former stock-car driver with five daughters who has fallen on hard times. Eventually Susan is able to keep Steve on a budget, while Steve is able to keep Susan on his arm.

On June 19, 1967 Elvis reported to MGM to begin work. The day began with a music meeting at 10:00 AM and at 2:00 PM he had wardrobe fittings. Elvis and his manager Colonel Tom Parker then gave the leading lady, Elvis' friend, Nancy Sinatra a car that had 'Speedway' painted on one door and 'Starring Nancy & Elvis' on the other. Sometimes Elvis' movies were released out of sequence with the order in which they were filmed. Such was the case with his twenty-seventh movie, the 1968 MGM film 'Speedway'. It was actually filmed in June of 1967 prior to filming movie number 26, 'Stay Away Joe'. However, 'Stay Away Joe' beat 'Speedway' to release by three months. 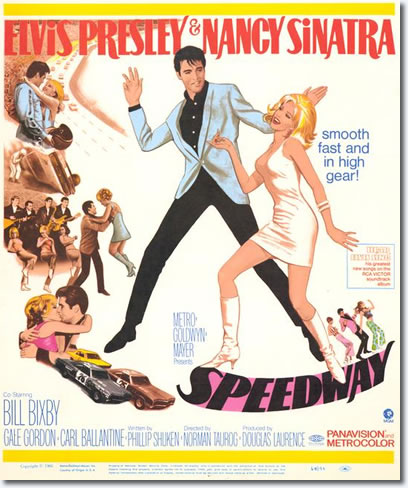 On July 12, 1967 on the set of 'Speedway' Elvis announced that his wife Priscilla was pregnant. He told a reporter, 'This is the greatest thing that has ever happened to me'.

Soon after, his co-star Nancy Sinatra gave a baby shower for Priscilla.

Actor Bill Bixby co-starred with Elvis as his character Steve Grayson's friend and business manager Kenny Donford. Kenny's lack of bookkeeping skills lands them both in trouble with the IRS. Mr. Bixby had previously worked with Elvis in the film 'Clambake'. The only child of a department store owner, Mr. Bixby grew up in the San Francisco area.

Nancy Sinatra's role of Susan Jacks first had been offered to the popular 1960s English singer Petula Clark. Ms. Clark turned the part down and it then was given to Sinatra, who also enjoyed popularity as a singer with her #1 songs 'These Boots Were Made For Walking', 'Sugar Town' and 'Something Stupid'. Nancy, the daughter of Frank Sinatra, had met Elvis in 1960, when he returned from serving in the U.S. Army. She was on hand to welcome Elvis at McGuire Air Force Base upon his arrival back to America from Germany. She also appeared with Elvis on her father's 'Frank Sinatra--Timex Show', which was themed 'Welcome Home, Elvis'. 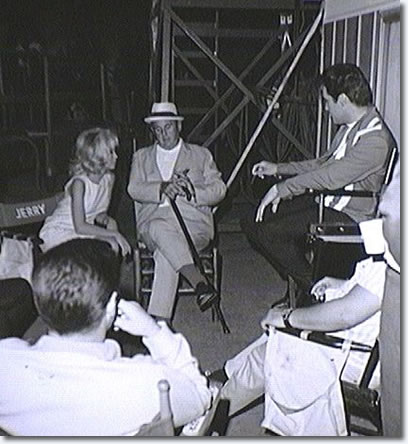 Between scenes on the set of Speedway with Elvis, Nancy Sinatra, the Colonel

The producer was Douglas Laurence, who also produced the Elvis movies Stay Away Joe and 'Live A Little, Love A Little'. Mr. Laurence was at one time the director of entertainment for the Flamingo Hotel in Las Vegas.

This was the last film for multi-award-winning cinematographer Joseph Ruttenberg who had also worked on Elvis' film 'It Happened At The World's Fair'. Mr. Ruttenberg was nominated ten times for Academy Awards.

Gale Gordon played the IRS agent R. W. Hepworth. Known for his stuffy characters such as Osgood Conklin of the 'Our Miss Brooks' and Mr. Wilson of the 'Dennis The Menace' TV series, he might be best remembered as Lucille Ball's nemesis on 'The Lucy Show', 'The Lucille Ball Comedy Hour' and 'Here's Lucy' among other projects he did with her. Mr. Gordon got his first big break in radio on the 'Fibber McGee & Molly' show.

William Schallert's role of Abel Esterlake was only one of the hundreds of roles this actor has had in film and TV. The son of 'Los Angeles Times' drama editor and critic Edwin Schallert, William Schallert began acting in the early 1940s. Among his credits is playing the father on the 'Patty Duke Show', which garnered him the #39 spot in TV Guide's list of the '50 Greatest TV Dads of All Time'. He played another father, Carson Drew, on the 'Nancy Drew Mysteries' and he was Genreral Robert E. Lee in the 'North and South' television mini-series. Also, his voice-over work can be heard on many projects. He believes people most recognize him for his role in the 'Star Trek' episode 'The Trouble With Tribbles'. He is a former president of the Screen Actors Guild.

Victoria Paige Meyerink played precocious Ellie Esterlake. The tiny tot who played Ellie's little sister Annie Esterlake was Patti Jean Keith, the granddaughter of director Norman Taurog. This was one of many films for Mr. Taurog (his eighth one with Elvis), however, this was Patti's only movie role.

Charlotte Stewart played the oft weepy Lori. She then went on to her roles as the much loved teacher Ms. Beadle in the TV series 'Little House on the Prairie' and Betty Briggs in the series 'Twin Peaks'.

Ross Hagen played rival race car driver Paul Dado. He might be best remembered for his role of Bart Jason on the TV series 'Daktari'. His credits also include writing, directing and producing.

Carl Ballantine was Birdie Kebner, the host of the Hangout club. Actually an accomplished magician, he specialized in his magic act as an inept magician whose tricks usually flopped. Actor Poncie Ponce played pit crew member Juan. He had previously been a regular on the 'Hawaiian Eye' TV series.

This Elvis movie was about stock car racing at the famed Charolotte Speedway in Charlotte, North Carolina, where location race scenes were filmed. Participating in the movie were several champion professional NASCAR racers including: Richard Petty, Buddy Baker, Cale Yarborough, Tiny Lund, Dick Hutcherson, G. C. Spencer, and Roy Mayne who played themselves. Sandy Reed, a professional race announcer, played the announcer for 'Speedway'. Christopher West, who played Billie Jo, was the reigning Queen of Laguna-Seca Sport Car Races at the time. Among the many stunt drivers used for this film were: Bob Harris, whose credits include 'Bonnie and Clyde', 'Bullitt', 'Magnum Force' and 'The Gumball Rally'. Courtney Brown, who worked on such films as 'Thunderball', 'Porky's' and 'Ace Ventura- Pet Detective'. Bud Ekins, who specialized in motorcycle stunts including some for 'The Great Escape', 'Then Came Bronson' and 'CHiPs'. Max Balchowsky who also provided stunt work for 'Viva Las Vegas', 'Grand Prix', 'Bullit' and 'The Deer Hunter'.

Bob Herron, a Navy boxing champion who has done stunts in hundreds of TV shows and movies. Carey Loftin whose stunt credits range in movies from the 1940s to the 1990s.

Ross Hagen played rival race car driver Paul Dado. He might be best remembered for his role of Bart Jason on the TV series 'Daktari'. His credits also include writing, directing and producing.

Burt Mustin who played the janitor at the Coffee Shop, had been a salesman until he got involved in radio and barbershop harmony in mid-life. He was 68 when he had his first movie role in the 1951, 'The Last Outpost'. Acting roles in movies and TV began to roll in and he became much in demand. A notable role is that of Gus the Fireman o the 'Leave It to Beaver' television series. He was 86 by the time he acted in 'Speedway'. Having just retired from his role of Arthur on the 'Phyllis' TV series, Mustin died at age 95.

Soundtrack recording sessions were held on June 20 - 21, 1967 at the MGM studio. During the sessions Elvis was visited by his father Vernon, Vernon's wife Dee and Dee's three sons, Ricky, Billy and David Stanley. They, along with Elvis and Nancy Sinatra, met Nelson Rockefeller, then governor of New York, who had come to the recording studio to record an album of patriotic recitations.

Principal photography for 'Speedway' ended on August 18, 1967. Elvis was finished with looping by August 21 and immediately went into makeup tests for 'Stay Away, Joe'. 'Speedway' premiered in Charlotte, North Carolina on June 12, 1968. It was #40 on Variety's movie list for the year of 1968.

Your Time Hasn't Come Yet Baby

He's Your Uncle, Not Your Dad

Written by Marty Dee & Billy Goehring, Suppose was cut from the final print of the film.

The enigma of Suppose