When Elvis Presley and Lizabeth Scott were paired in Paramount's Loving You in 1957, two Hollywood careers headed in different directions briefly merged. Presley, in just his second picture, was just 22 with a promising film career ahead of him. Scott, then 34, was making what would be her second last film in a career that began in 1945. The person who brought the unlikely couple together on the screen was Hal Wallis. The Paramount producer brought both Scott and Presley to Hollywood, and as twilight enveloped the career of his starlet, Wallis turned his attention to his new rock 'n' roll star. Bernard F. Dick detailed Wallis's efforts to build the careers of both actors in his 2004 biography, Hal Wallis: Producer to the Stars. 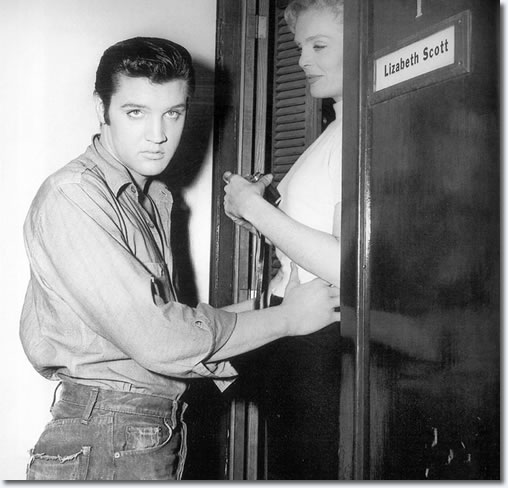 Born Emma Matzo to immigrant parents on September 29, 1922, Lizabeth Scott was raised in Scranton, Pennsylvania. To erase any vestiges of European influence from her speech, her parents paid for private elocution classes. Speaking properly was considered necessary to give one's children a way out of coal towns like Scranton in those days. The lessons, along with the natural deep resonance of her voice, gave Scott her distinctive vocal quality, what Dick termed a 'baritonal purr with a creamy huskiness'. At the age of 19, an affection for the stage took her to New York, where she attended the Alvienne School of Drama. Taking the name Elizabeth Scott, she started her stage career with the national tour cast of Hellzapoppin'. With a comely shape and a face capable of expressions ranging from exotic vamp to the girl-next-door, Scott found she could augment her work on and off Broadway with modeling layouts in magazines, such as Harper's Bazaar.

When Scott went to Los Angeles in 1944, she dropped the 'E' from her first name. There were lots of Elizabeths in Hollywood, but no Lizabeth. Changing her name to something unique fit right in with the film industry's appetite for new and unique talent. (She legally changed her name to Lizabeth Scott in 1949.)

Scott arrived in Hollywood just when Hal Wallis was setting up shop at Paramount after leaving Warner Brothers. When he saw her screen test, an impressed Wallis signed her to a contract and rushed her into her first film, You Came Along, with costar Robert Cummings in January 1945. Unfortunately, the film turned out to be a poor vehicle to introduce Lizabeth's talents to the public. The plot revolved around a terminally ill G.I., making Scott's role as the grieving wife unappealing.

Lizabeth Scott had another thing going against her in Hollywood. Her rough voice seemed to mirror that of Lauren Bacall, who had made her film debut a year before Scott's. Critics began calling Scott 'Wallis's Lauren Bacall', and the comparison damaged the unique image Scott sought for herself. Wallis didn't help matters when he, according to Dick, instructed his publicist to make sure Scott's publicity photos were 'on the sexy, sultry side ... on the order of the stuff that was done on Bacall'. 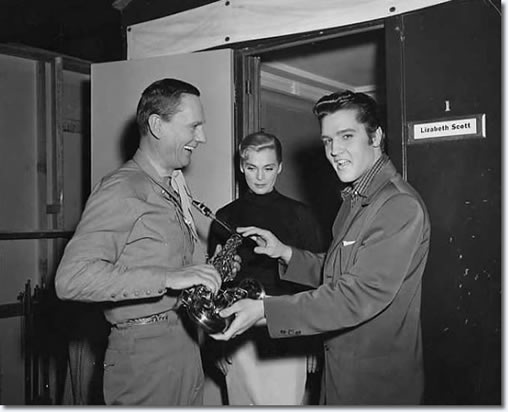 The result was that Scott, while working steadily in films in the late forties and early fifties, never received the signature role that would have made her a top star. 'Wallis thought he had a star in Lizabeth Scott', Dick noted, 'what he had was a talented actress whose range was never fully exploited'. She was typecast as a dark lady, playing a home-wrecker, a murderer, and a self-absorbed wife in various films.

Reality set in for Lizabeth Scott and Hal Wallis - By 1949 both Hal Wallis and Elizabeth Scott realized that at the age of 27 she had gone about as far in Hollywood as she could go. While polls showed she was still popular with movie-goers, both conceded she would never be a star. Between supporting film roles, Lizabeth returned to the stage, and Wallis began looking elsewhere for new talent. Fast forward seven years to 1956. Wallis was searching for an appropriate debut vehicle for his newest discovery - Elvis Presley. Unable to find what he was looking for, he loaned Presley out to 20th Century Fox for Love Me Tender. Wallis wanted a script that would effectively feature Presley's dual appeals - his sensuality as an actor and his raucous singing style.

In 1957 Wallis found the script he was looking for.

Loving You he paired Presley romantically with Dolores Hart, another newcomer for whom he had high hopes. To solidify the cast, Wallis brought in Lizabeth Scott and Wendell Corey, two veterans to help support the novices but with not enough star power to overshadow Presley.

In his Wallis biography, Dick evaluated Scott's work in '[Loving You' as follows:

'Lizabeth Scott's performance as Glenda, the press agent capable of being both manipulative and compassionate, was as much a revelation as Elvis'. Although she had second billing, she was clearly the female lead and had a role as important as Elvis'. Looking trim and elegant, Lizabeth took a character that could easily have been unsympathetic and made her the kind of publicist any newcomer would welcome. 'But what was even more impressive about Lizabeth's performance was her rapport with Elvis, which revealed deep respect for him and his talent. Deke's falling in love with Glenda might have seemed strained in the script, yet Lizabeth and Elvis interacted so well with each other that theirs became the natural attraction of a protégé toward a patron. 'The most powerful scene in the movie is the one in which Glenda and her discovery drive to a cemetery where she learns that the singer who calls himself ‘Deke Rivers', took that name from a gravestone to assume a new identity after losing his parents. The naturalness with which Lizabeth and Elvis played the scene - he with the wrenching sincerity of an overdue confession, she with the humility of someone to whom another has bared his soul - suggests that, under different circumstances, each might have taken a different career route'.

With her strong performance in 'Loving You', Lizabeth Scott demonstrated that she was up to many more film roles, had she wanted them. But there would be just one more movie for her. Pulp in 1972.

As for Lizabeth Scott's disappointing career, Dick lays most of the blame on Hal Wallis. 'Lizabeth Scott is an excellent example of what can go wrong with a career when a producer is more concerned with controlling his creation than nurturing it', Dick contended. 'Wallis may have wanted the best for his debutante, but he failed to provide her with a vehicle that allowed for a starmaking performance'.

Lizabeth, however, also deserves some blame for her lackluster career. She simply accepted the roles Wallis and other producers gave her. Other Wallis stars, notably Burt Lancaster and Charlton Heston, stood up and refused to accept unchallenging roles that Wallis offered. Lizabeth Scott never demanded that her talent be respected. Neither did Elvis, for that matter.