Elvis Presley's most critically acclaimed performance as an actor was in what is considered (rivaled only by 'Jailhouse Rock') the best of all the films he starred in - 'King Creole' (1958). The story was based upon the Harold Robbins novel 'A Stone For Danny Fisher'. Generally considered Elvis' best narrative film, King Creole benefited from the talents of several Hollywood notables. Producer Hal Wallis chose one of his closest associates, the well-respected Michael Curtiz, to direct the film. Best known as the director of Casablanca, Curtiz was an expert craftsman known for his deft handling of a wide variety of film genres during his 30-year career. The tight control over the many twists and subplots of King Creole reflects Curtiz's expertise.

Other Hollywood veterans who made up the crew included cinematographer Russell Harlan, who photographed the film in a dark, moody lighting style that captured the seedy but seductive atmosphere of the French Quarter.

The level of experience that Wallis, Curtiz, and Harlan brought to the production of King Creole would never be matched in another Presley feature. Elvis' supporting cast represented some of the finest Hollywood actors of the 1950s. Elvis played the role of Danny. Danny Fisher (Elvis) coming up from the ghetto to seek fame and fortune as a singer in the New Orleans Jazz clubs. Along the way he tangles with gangland boss Maxie Fields (Walter Matthau) and love interest Ronnie played by Carolyn Jones. 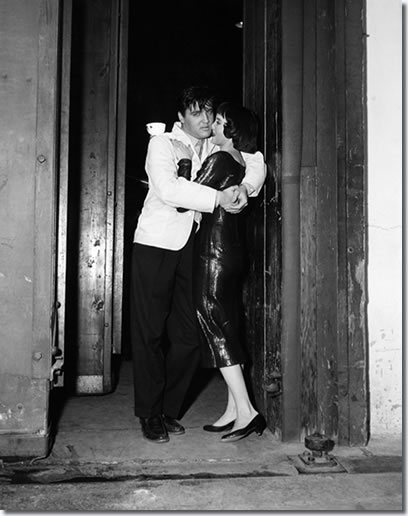 Elvis Presley and Carolyn Jones as they relax for photographs and Carolyn holds a cup of tea.

Danny is dissatisfied with the financial situation of his poverty-stricken family and blames his father for their problems. He sweeps up at a nightclub to earn extra money -- a job that places the impressionable young man in the company of some shady characters. An encounter with Ronnie, a local gangster's moll portrayed by Carolyn Jones, results in Danny's expulsion from high school. On the job that night at the club, Danny runs into Ronnie and gangster Maxie Fields, played by Walter Matthau, who insist that Danny sing a song.Danny's natural talent attracts the attention of the owner of the King Creole night spot, who offers him a job.

Danny is at a crossroads. He is torn between the love of good girl Nellie, played by Dolores Hart, and his attraction to the ill-fated Ronnie. Danny is also torn between his desire for a singing career and the temptation to join a street gang. A violent altercation with the gang's leader, played by Vic Morrow, leaves Danny with a serious knife wound. After Ronnie nurses him back to health, a jealous Maxie shoots her in cold blood.

Maxie in turn is shot by a gang member Danny had once befriended. Danny returns to singing at the King Creole, reconciled with his family and with Nellie. 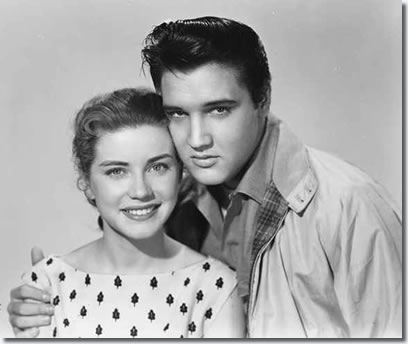 While on location in New Orleans, the crowds of curious onlookers and excited fans were so large that Wallis had to arrange for tighter security. The entire top floor of the Roosevelt Hotel was booked for the film's cast. Pinkerton guards patrolled the floor, the elevators, and the staircase to keep overzealous fans from Elvis.

As an added precaution, Wallis insisted that the elevator should not be allowed to run to the top floor to prevent any outsiders from getting onto Elvis' floor. Simply returning to his hotel room at the end of the day proved difficult for Elvis because there were always large crowds waiting for him in the lobby. To avoid the crowds, Elvis entered an adjacent building, climbed out a window, crossed the roof, and entered his hotel via the fire escape. In his autobiography, Hal Wallis recalled a particularly sad moment for Elvis. Eager to try some of New Orleans' famous cuisine, Elvis was disappointed to learn he could not dine at the legendary Antoine's because no one could guarantee crowd control. During his stay in New Orleans, Elvis ordered room service. This isolation was part of the price Elvis paid for stardom, and by this point, it had begun to affect his lifestyle. 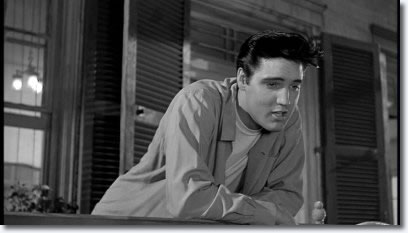 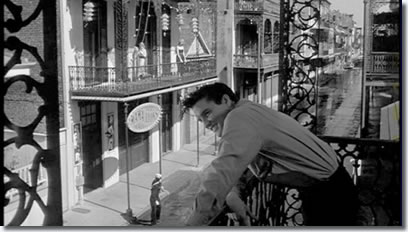 Harold Robbins was a successful author whose novels sold over 750,000,000 copies worldwide and most of them were made into movies. Robbins grew up in an orphanage as well as in several foster homes. He took his name from one of those foster families. His early jobs included a numbers runner and a futures buyer. He had made and lost a million dollars by age twenty. He became a writer after working his way up with Universal Pictures, starting as a shipping clerk. He specialized in novels about celebrity and Hollywood. 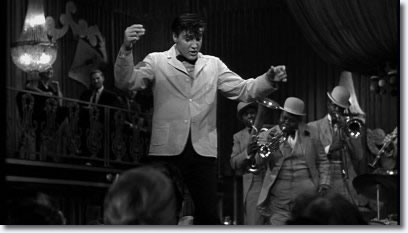 'King Creole' co-starred Carolyn Jones, who is best known for her work in the TV show 'The Addams Family'. However, long before the TV series, she appeared in a number of stage productions and in movies such as 'East of Eden', The Seven Year Itch', The Tender Trap' and 'The Man Who Knew Too Much', as well as 'The Bachelor Party', for which she her 1957 Oscar nomination or Best Supporting Actress. She also won a Golden Globe award in 1958 as Most Promising Female Newcomer. Ms. Jones was born in Amarillo, Texas in 1929. 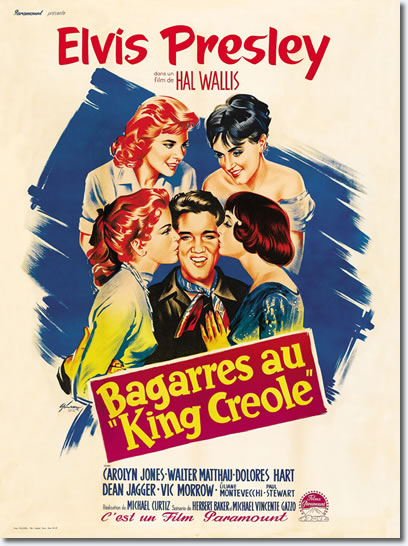 Also co-starring in 'King Creole' was Walter Matthau, born Walter Matuschanskayasky in New York City. Matthau's parents were Russian Jewish immigrants. He served in the Army Air Corps during World War II as a radio cryptographer. After the war he began his movie career. His many film credits include: 'The Kentuckian', Lonely Are The Brave', Charade', The Fortune Cookie', The Odd Couple', Cactus Flower', Kotch', The Sunshine Boys', The Bad News Bears', Dennis The Menace', Grumpy Old Men', and 'Grumpier Old Men' to name a few. Matthau was nominated for eight Golden Globe Awards, winning one in 1976 for Best Actor in 'The Sunshine Boys'. He was nominated for three Academy Awards, winning one in 1967.

Co-starring with Elvis for a second time was Dolores Hart, daughter of actor Bert Hicks and niece of singer Mario Lanza. Dolores also starred with Elvis in his 1957 movie 'Loving You'. She would go on the appear in several other films including 'Where The Boys Are' and 'Come Fly With Me'. Ms. Hart left her successful film career to become a nun in the cloistered Benedictine Monastery in Bethlehem, Connecticut, where, today, she a Mother Superior and still a voting member of the Academy of Motion Picture Arts and Sciences (The Oscars).

Dean Jagger played Elvis' father in 'King Creole'. He began in vaudeville in the 1920s and went on to appear in films such as 'Brigham Young - Frontiersman', The Robe', Elmer Gantry' and 'White Christmas', to name a few. He won the Academy Award for Best Supporting Actor for his role in 'Twelve O'Clock High'. 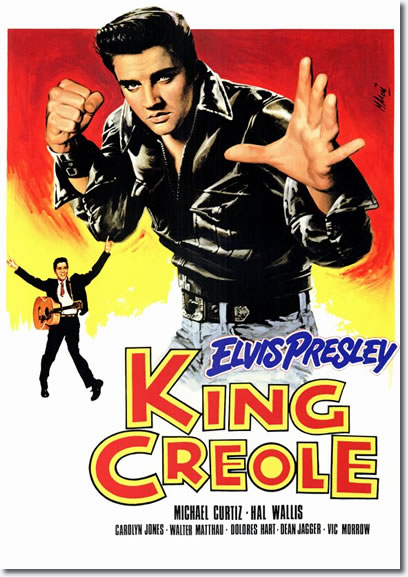 Actor Vic Morrow played Shark in the movie with Elvis. Born in New York, he had dropped out of school to join the Navy. After serving in the Navy, he went to school to study pre-law. After a taste of acting in a school play, Morrow decided to change majors and went into acting. After graduation, he signed with MGM. His movie debut was in 'Blackboard Jungle' as a street punk. He then became typecast as a heavy, which is what he also played in 'King Creole'. In the 1960's he became well known for his role in the TV series 'Combat!', for which he received an Emmy nomination. He also took up directing. In 1983 he was killed in an accident on the set of the film 'Twilight Zone: The Movie'. Today, his daughter, Jennifer Jason Leigh, is a successful actress.

As Long As I Have You

Don't Ask Me Why

An Interview with Mother Dolores Hart

The King and I: Star-Turned-Nun Tells All in ‘God is the Bigger Elvis' [Dolores Hart]

Elvis On Screen: A Dozen Favorites

David English who complied the King Creole photo pages found in our photo section had this to say about the book, 'I have the new King Creole book in my hands right now. It really is superb, most of the photo's I have never seen before'. 'The first section deals with the Recording Sessions, which puts my topic found in the picture section largely redundant. The second section has photo's by song alongside behind the scenes.

The highlight has shots from the deleted number 'Danny'.

Do yourself a favor, buy the King Creole Hardcover Book + Soundtrack CD.