A remake of the 1937 drama of the same title starring Edward G. Robinson and Humphrey Bogart, Kid Galahad features Elvis Presley as boxer Walter Gulick. Though not a great boxer, Walter has a powerful right hook and can take a lot of punches. Gig Young costars as Willy Grogan, a down-and-out gambler who owns the training camp where Walter spars with other boxers. Willy decides to groom Walter to be a professional boxer, hoping to make enough money to pay off his gambling debts to gangster Otto Danzig, chillingly portrayed by character actor David Lewis.

Willy's relationship with Walter changes when Walter fails in love with Willy's sister, Rose, played by Joan Blackman, Elvis' costar from Blue Hawaii. Willy does not want Rose to be involved with Walter, so he allows Walter to be overmatched for his next fight by a superior boxer.

Just before the big fight, Willy realizes that he has compromised his moral integrity. He and Walter rid themselves of Danzig and Walter goes on to win the match. 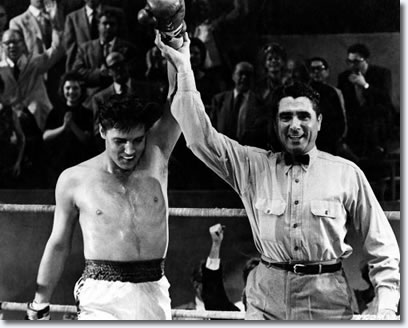 Gig Young played the fight promoter. Born Byron Barr, he developed a love of acting while growing up in his native Minnesota. He worked in such films as 'Desk Set', 'That Touch of Mink' and 'Strange Bedfellows'. He received Academy Award nominations as Best Supporting Actor for his work in the films 'Come Fill the Cup' and 'Teacher's Pet'. He won both an Academy Award and a Golden Globe Award as Best Supporting Actor for his performance in the 1969 film 'They Shoot Horses Don't They?'. 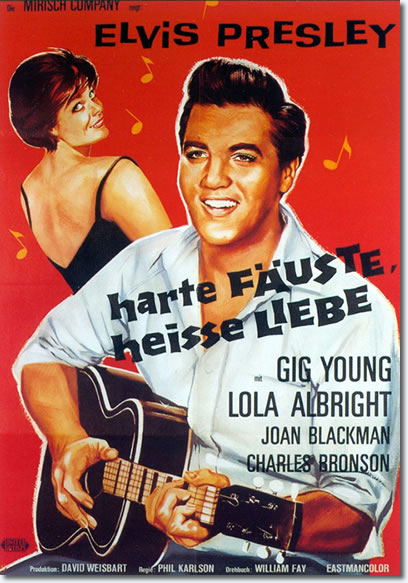 Charles Bronson played trainer Lew Nyack in 'Kid Galahad'. Bronson was born Charles Buchinsky in Pennsylvania in 1921, one of 15 children born to Lithuanian immigrant parents. The only member of his family to complete high school, he worked the coal mines to help support his family. During World War II he served in the U.S. Army and afterwards used his G.I. Bill to study acting. His credits include hundreds of movies and TV programs as supporting actor and headlining star - usually in a craggy, tough guy role. His films include 'The Magnificent Seven', 'The Dirty Dozen', 'The Valachi Papers', 'Mr. Majestyk' and 'Death Wish' (I, II, III, IV & V). He was nominated for an Emmy Award in 1961 for Outstanding Performance in a Supporting Role for his work in television's G.E. Theatre presentation 'Memory in White'. In 1972 he received a Golden Globe Award for Favorite Male World Film Actor. His most recent work has been a series of TV movies called 'Family of Cops'. 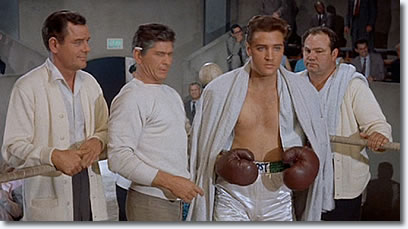 Joan Blackman played Elvis' love interest Rose Grogan, sister of the promoter. She and Elvis had worked together the year before in 'Blue Hawaii'. Blackman's other credits include the films 'Moonrunners' and 'Macon County Line' and a number of TV guest appearances.

Lola Albright played Dolly Fletcher, the promoter's girlfriend. She is probably best known for her Emmy nominated role of singer Edie Hart on the TV series 'Peter Gunn'. She acted in such films as 'Easter Parade' and 'Champion' and has numerous guest TV guest appearances among her credits.

Elvis had just acquired Scatter, a pet chimpanzee that amused Elvis with his antics. Scatter often traveled to California with them and visited the set of Elvis' movies. This was Scatter's first trip to Hollywood.

In 'Kid Galahad' the story called for the fighters training camp to be set in the Catskills of New York in the summertime. However, the movie was filmed in the fall/winter season in Idlywild, California, a resort east of Los Angeles. In this higher elevation it was getting colder as winter temperatures do, even in sunny California. The actors have recalled having to wear summer wardrobe and smile while in fact they were freezing cold and trying not to have their breath show up on camera.

David Lewis played Otto Danzig in 'Kid Galahad'. He also worked in such films as 'The Apartment', 'The Absent-Minded Professor' and 'The Boston Strangler'. However, he might be more recognized for his long running later role as the original Edward Quartermaine in the TV soap opera 'General Hospital'. Long time character actor Robert Emhardt played Maynard the cook, known for his corned beef. Mr. Emhardt often played sinister types in his movie career. You can also see him as the banker in Elvis' 1969 movie 'Change of Habit'.

Ned Glass, another well known character actor, played Max Lieberman, owner of the Shangri-La where the film's character named Dolly used to sing. You might have recognized him from Elvis' 1958 movie 'King Creole' in which he played a hotel desk clerk.

Ed Asner played assistant district attorney Frank Gerson. It was only Mr. Asner's second movie role, having debuted just before 'Kid Galahad' in the movie 'The Murder Men'. Later, he played a small role in the 1969 movie 'Change of Habit', starring Elvis and Mary Tyler Moore. Soon after that, stardom came to Asner through television. He is best known for his long-running role as Lou Grant in 'The Mary Tyler Moore Show' and the spin-off series 'Lou Grant'. Other TV credits include the mini-series 'Roots' and 'Rich Man, Poor Man'.

Mushy Callahan, world champion junior welterweight boxer, served as Elvis' boxing coach for his boxing scenes. Mr. Callahan also served as technical adviser/fight choreographer on such films as 'Gentleman Jim', 'From Here To Eternity' and 'The Great White Hope'. He was inducted into the World Boxing Hall of Fame in 1989.

Also making the fight scenes more authentic was Orlando do la Fuente who played Sugarboy Romero. At the time he was an undefeated welterweight boxer.

David Weisbart produced the film. He had previously produced films such as 'Rebel Without A Cause' and 'April Love', as well as three Elvis films: 'Love Me Tender', 'Flaming Star' and 'Follow That Dream'. Weisbart went on to produce 'The Pleasure Seekers' and 'Valley of the Dolls'.

'Kid Galahad' was directed by Phil Karlson, who was a young law student when he got a job as a prop man at Universal Pictures. He soon took to the film business and pursued directing in such low budget projects as films starring the Bowery Boys, Charlie Chan and the comedy team of Abbott & Costello. He also directed 'Hell to Eternity', 'The Young Doctors', 'Ben', and 'Walking Tall'.

A theatrically released film called 'Kid Galahad' came out in 1937, based on a Frances Wallace story and directed by Michael Curtiz (who later directed the Elvis film 'King Creole' in 1958). 'Kid Galahad' starred Edward G. Robinson, Bette Davis and Humphrey Bogart. Wayne Morris played the role of Ward 'Kid Galahad' Guisenberry a bellhop who unintentionally becomes a boxer and falls in love with his promoter's sister.

When this movie aired on TV it was renamed 'Battling Bellhop' to avoid confusion with the 1962 film 'Kid Galahad' starring Elvis Presley.

Behind the Scenes of Kid Galahad

For his role as boxer Walter Gulick, Elvis eagerly began training before the start of production. He prepared for his boxing scenes as a real fighter might prepare for a fight. He did road work, went on a strict protein diet, punched bags, sparred for hours with professionals, and lost 12 pounds in the process.

To prepare for his role, Elvis trained with former junior welterweight champion Mushy Callahan.Coaching the young singer was Mushy Callahan, the junior welterweight champion from 1926 to 1930. Callahan had been plying his skills around Hollywood for some time, having coached actors Kirk Douglas, Errol Flynn, and others in boxing-related films. Callahan was always conscious of training an actor so that his boxing skills suited the character. Callahan praised Elvis for his natural athletic skills -- at least in the publicity for the film. 'He's got a good physique and excellent coordination', the old pro revealed in an interview. 'He never boxed before but he picked it up quick because of his karate training.'

Home Is Where The Heart Is 1:49 (Sherman Edwards / Hal David)

The soundtrack EP was released on September 17, reaching #30 on the Billboard Hot 100.

The Lost 1962 NME Article By Nigel Goodall : Is Presley Making Too Many Films?

[Original NME article from April 6, 1962 that mentions a projected Elvis Presley  charity concert in Britain. Includes many great images, including the ad that announces the concert that proves it just wasn't talk.]

Ad for the projected charity concert in Britain

Original NME article : Is Presley Making Too Many Films?