Ridgefield, July 5. -- Services for Judy Tyler, 24-year-old screen star who, with her actor-husband, was killed yesterday in an auto accident near the tourist resort of Billy the Kid, Wyo., will take place Tuesday at 2:30 p.m. in the Frank Campbell funeral home, 81st street and Madison avenue. Miss Tyler, who was a member of the First Church of Christ Scientist, will be cremated at Ferncliff, N.Y.

The daughter of Mr. and Mrs. Julian S. Hess, of Nutmeg ridge, Miss Tyler, with her husband of less than four months, Gregory Lafayette, was scheduled to have appeared on Pantomime Quiz, which will be inaugurated tonight on CBS. Mr. and Mrs. Hess, who have resided the past five years in Ridgefield where Mr. Hess is a building contractor, are Miss Tyler's only survivors.

She had just completed her first starring dramatic role, playing opposite ELVIS PRESLEY in 'Jailhouse Rock', and a musical 'Bop Girl Goes Calypso', is scheduled for July 15 release. Miss Tyler co-starred in Rodgers and Hammerstein's 'Pipe Dream' with Bill Johnson, who died five months ago of a heart ailment. She had appeared on numerous TV shows and recently completed a series of melodramas, 'Perry Mason, Detective'.

The Lafayettes were motoring east from Hollywood. Police said Mr. Lafayette apparently swung into the lane of oncoming traffic to avoid hitting a car which was pulling onto U.S. Highway 30 from a tourist curio shop.

A dog and cat in the Lafayettes' car also were killed. 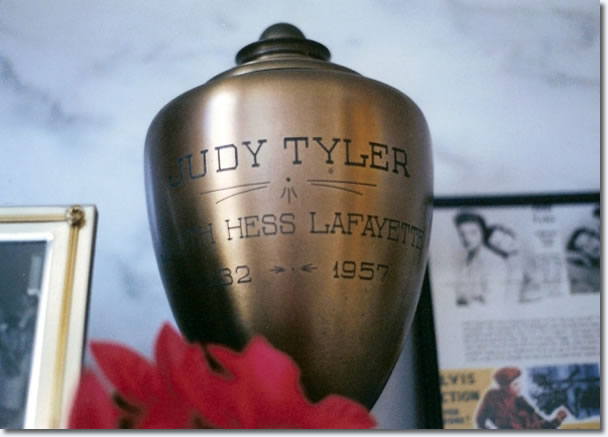 In 1957, Judy Tyler began work on her second and final film. She was chosen to co-star with Elvis Presley in his third motion picture, Jailhouse Rock. She would play Peggy Van Alden, a record promoter who persuades Vince Everett (Elvis) to make a record. On July 4th, 1957, just 3 days after Judy had finished filming Jailhouse Rock, Judy Tyler and her second husband were killed in a car accident. Elvis' friends say that the tragedy was such a blow to Elvis that he never again watched the film.