Elvis' third movie was the 1957 MGM film 'Jailhouse Rock'. The principal photography for the movie began the following week on May 13th. with the famous 'Jailhouse Rock' production number.

Vince Everett (Elvis Presley) was sent to prison after being convicted of Manslaughter. When his cell-mate Hank Houghton (Mickey Shaughnessy), a country & western singer, recognizes Vince's singing-talent they make a contract to perform together and to share the profit. Once out of jail, Vince tries unsucessfully to get a job as singer however only after he has help from Peggy van Alden (Judy Tyler) does he achieve success and they start a record-company together. Vince seems only to be interested in fame and fortune until a confrontation with Hank, who doesn't accept his behavior.

During the fight Vince's throat gets injured, which puts his career in danger. After recovering everyone rallys round to see Vince get his voice back and realise the error of his ways. The films highlights are the 'Jailhouse Rock' sequence and The 'Don't Leave me' Now recording studio sequence where Vince finds his style. 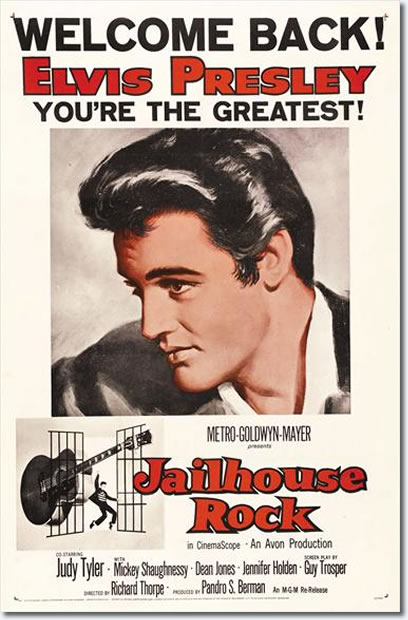 This was Elvis' first film for MGM.

After starting work on the soundtrack on April 30, he reported to the lot on May 6, 1957 for costume fittings, makeup tests and dance rehearsals. He was assigned to Clark Gable's former dressing room.

'Jailhouse Rock' was produced by Pandro S. Berman, who came from a movie industry family. He started out as a script clerk and worked his way up to assistant to David O. Selznick of RKO. It is Mr. Berman who is credited with bringing together Ginger Rogers and Fred Astaire and making a star of Katherine Hepburn.

The director of 'Jailhouse Rock' was Richard Thorpe, who began his career in Vaudeville and then acted in a few movies in the early 1920's. He tried his hand at screen writing, sometimes using the pen name Frank L. Inghram. By 1923, he began directing. Over the course of his career, he directly nearly 200 films, including 'Ivanhoe' and 'The Prisoner of Zenda'. He teamed up with Elvis a second time by directing 1963's 'Fun In Acapulco'. He retired in 1967. Art direction was provided by award winners Randall Duell and William Horning. 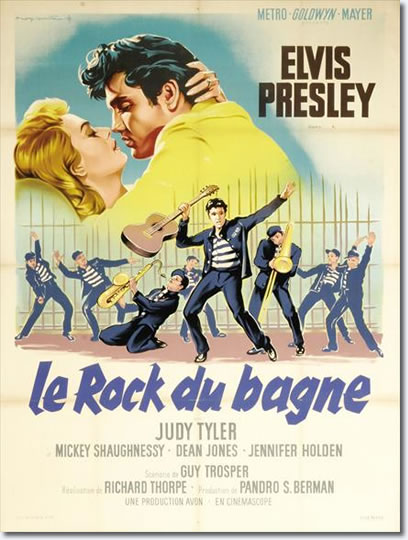 Studying inter-office memos within the MGM company, we find that Elvis' character name was in question, going from Vince Matthews to suggestions such as Vince Delwyn, Vince Jackwood, Vince Ledway, Vince Edwards and Vince Edmunds before Vince Everett was finally settled upon.

It seems that proper names, company names, city names and phone numbers used in a script are subject to approval by the legal department, which watches for conflicts with actual places and people.

Soda bottles were to be generic rather than a popular brand name. Stock footage of a prison in Raleigh, North Carolina used previously in the film 'Carbine Williams' was approved for use in 'Jailhouse Rock'; however, the director did not wish to use a name for the prison.

So it was decided that Vince's fan mail must not be filmed in a way that an address would show.

On Monday, May 6, 1957, Elvis met with Alex Romero, the choreographer for his third film 'Jailhouse Rock'.

It often has been reported incorrectly that Elvis was the choreographer for the big 'Jailhouse Rock' production number in this film. Alex Romero was the choreographer for the film, but Elvis' own natural moves were Romero's inspiration. Mr. Romero had designed the production number for the song 'Jailhouse Rock' . Then, when Elvis tried the Fred Astaire type of steps that has been planned, they found that it wasn't going to work. So, Mr. Romero asked Elvis to perform several songs as if he were on stage. After watching Elvis perform 'Hound Dog', 'Don't Be Cruel' and 'All Shook Up', Mr. Romero announced 'I got it. See you later, Elvis'. and then explained that he was going home to work out a routine using Elvis' natural movements. The next day, they worked their way through to create the now-classic 'Jailhouse Rock' production number, one of pop/rock music's greatest and most iconic moments on film, a performance considered by many to be ahead of its time and the father of modern-day music videos. Mr. Romero was also the choreographer for the movie 'Clambake'.

With all the dance movements fresh in his head, Elvis was excited to do the production number, but an unusual mishap caused a delay. While sliding down the pole in the scene, Elvis lost the cap off of a tooth. It was discovered that he had aspirated the cap and that it had lodged in his lung. It was successfully removed by a surgeon, who parted his famous vocal cords and retrieved the errant dental appliance.

Although Elvis' voice was hoarse for a few days, to the relief of everyone there was no permanent vocal damage and he was released from the hospital on the 16th. (This is the day his family moved into Graceland, in Memphis.) Ironically, Vice Everett, Elvis' character in the film, had an injury to his vocal cords and had friends and associates holding their breath to see if there would be lasting damage to his singing voice.

While Mr. Romero and Elvis were rehearsing, Elvis' friend, actor Nick Adams, introduced him to fellow actor and dancer Russ Tamblyn. Russ Tamblyn grew up in the movies and his credits include such films as 'Seven Brides For Seven Brothers' and 'West Side Story'. Today, he is also known as father to the actress Amber Tamblyn, star of the current hit TV series 'Joan of Arcadia'. While visiting at the Tamblyn beach house that weekend before filming began, Elvis and Russ practiced dance movements and ways for Elvis to improve his performance.

Elvis' leading lady in the movie was Judy Tyler. Her father was a big band trumpeter and her mother had been a Ziegfeld Follies dancer. Judy had studied acting and dance. She had danced with the chorus line of the famous Copacabana Club and had played the role of Princess Summerfall Winterspring on the popular children's television program, 'The Howdy Doody Show'. She was a newlywed at the time she began work on 'Jailhouse Rock' with Elvis in May of 1957. Sadly, on July 3rd, soon after finishing the film, she and her husband were killed in an automobile accident during a cross-country trip. Elvis was badly shaken by the news.

Mickey Shaughnessy played Hunk Houghton, Vince's cell mate. His career included the films 'North To Alaska', 'Pocketful of Miracles' and 'How The West Was Won'. He received a Golden Laurel Award nomination in 1958 for the film 'Don't Go Near The Water'. He also had guest roles on a number of TV shows in the 50's and 60's.

Vaughn Taylor played Mr. Shores and was the film's narrator. He had a very long career in TV playing roles in nearly two hundred shows and receiving Emmy nominations for Best Actor in 1952 and 1953.

Anne Neyland played Vince's date Laury Jackson. Elvis dated her in real life while the film was in production. Her credits include the films 'Hidden Fear' and the original version of 'Ocean's Eleven'. 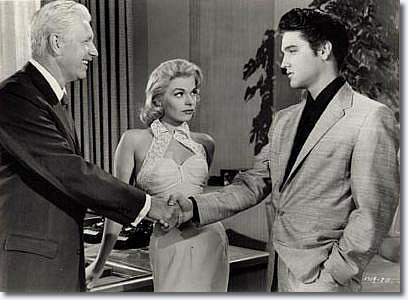 Above, William Hart and Elvis shake, Jennifer Holden in between both.

During filming, actor Robert Mitchum visited Elvis and indicated he wanted Elvis to play his son in his forthcoming film 'Thunder Road'. Elvis did not end up doing the film.

During production of 'Jailhouse Rock' Elvis received a wallaby as a gift from fans. Unable to keep the pet, he sent it home to Memphis as a donation to the local zoo.

Trivia: Early in the film, Vince Everett is sent to prison for manslaughter. The number on his prison uniform is 6239. After prison, when Vince becomes a star and does the 'Jailhouse Rock' production number for a TV show, the number on his prison costume is 6240. Another bit of trivia - the studio commissary added to their menu some of Elvis' favorite foods, which included crisp bacon and mashed potatoes with brown gravy.

While filming there was a small fire in Jennifer Holden's dressing room.

Elvis, ever the hero, carried the actress out to safety. 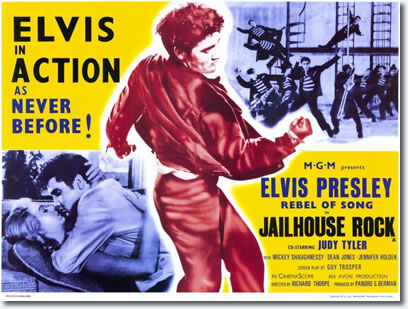 Elvis finished his duties with 'Jailhouse Rock' and returned to Memphis, boarding a train on June 25, 1957. Impatient and excited to get there, he left the train in Lafayette, Louisiana and rented a car to drive the rest of the way. He spent his first night in his new home, Graceland, on June 26, 1957.

The film's premiere was attended by Anne Neyland on October 17, 1957 in Memphis.

It was released nationwide on November 8th.

The critics were unkind to Elvis' role of a man who frequented bars and had killed a man. The film reached #3 for the week in Variety and #14 for the year. It was re-released on March 9, 1960 in honor of Elvis' return from service in the U.S. Army. In 1969 'Variety' reported that in the U.S. and Canada the film had earned over $4 million or the equivalent of the movie 'The Wizard of Oz'.

Behind the Scenes of Jailhouse Rock

Elvis was devastated when costar Judy Tyler and Gregory Lafayette, her husband of only a few months, were killed in a gruesome car crash near Billy the Kid, Wyoming. When told of the accident, Elvis broke down and cried. His reaction was disclosed to a reporter who wrote about it for the Memphis Commercial Appeal. Other papers around the country then picked up the incident. The article revealed a pensive young man, who murmured in an unguarded moment, 'I remember the last night I saw them. They were leaving on a trip...All of us boys really loved that girl. She meant a lot to all of us. I don't believe I can stand to see the movie we made together now...'

I Want To Be Free