Elvis Presley's nineteenth movie was 'Harum Scarum' (MGM, 1965), also known by one of the working titles as 'Harem Holiday'. Another 'quickie' produced on a very low budget by Sam Katzman, Harum Scarum features Elvis Presley as matinee idol Johnny Tyronne. A takeoff on Elvis himself, Johnny is a famous movie and recording star who makes the women swoon and the men jealous. On a personal appearance tour in Lunarkand -- a fictional country somewhere in the Middle East -- Johnny is kidnapped by a gang of assassins and suddenly thrust into a plot to kill King Toranshah.

Johnny escapes and falls in with a band of pickpockets and rogues, all the while rescuing damsels in distress and singing a variety of pop-styled tunes. Johnny falls in love with a beautiful handmaiden, played by Mary Ann Mobley; unbeknownst to him, she is really Princess Shalimar, daughter of King Toranshah. Johnny thwarts the assassination attempt on the king, wins the heart of Princess Shalimar, and returns to America with a new act.

Principal photography began on March 15, 1965. Elvis was finished his work on the movie on April 19, 1965. Filming took place on the lot in Culver City, California with sets reused from Cecil B. DeMille's 1925 silent film 'King of Kings' and with costumes from the 1944 movie 'Kismet' and its 1955 remake.

The film was released for Thanksgiving weekend on November 24, 1965 and reached #11 on the following week's 'Variety Box Office Survey', the fortieth-highest grossing film for 1965. The soundtrack album, which contained a souvenir picture of Elvis in one of his costumes from the film, had a 23-week stay on the Billboard LP chart, peaking at #8. 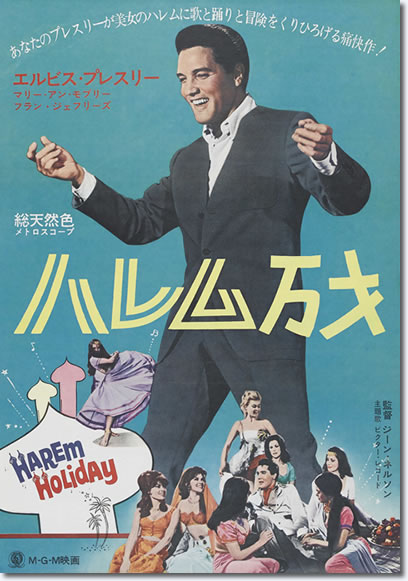 At first, Elvis was at first very excited about working again with director Gene Nelson, with whom he had worked on the film 'Kissin' Cousins', and about wearing the Rudolph Valentino type costumes. So enthusiastic was he that Priscilla says in her memoirs that Elvis would wear his full makeup and costume home each night, fully immersed in his role. His excitement soon waned when it became apparent that, as she put it, 'the plot was a joke, his character a fool, and the songs were disastrous'. Even Elvis' manager Colonel Parker expressed in a letter to MGM that it would take 'a 55th cousin to P.T. Barnum to sell this picture'. He suggested they add a talking camel as narrator, a la 'Francis the Talking Mule' in the Donald O'Connor movies, in order to save it and to make it seem as if the ridiculousness was intended. His idea was rejected by the studio. 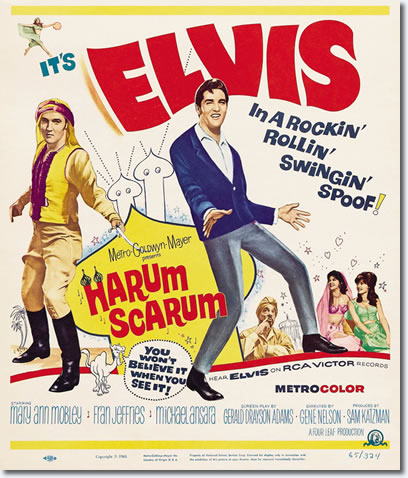 The director, Gene Nelson, had worked with Elvis on 'Kissin' Cousins'. Along with Gerald Drayson Adams he received a Writers Guild of America nomination in 1965 for that film as Best Written American Musical. In 1933, Mr. Nelson was inspired by Fred Astaire to become a dancer. He joined the Sonja Henie Ice Show and toured for three years with her before joining the US Army in World War II. After the war he appeared in movies, receiving a Golden Globe Award in 1951 as Most Promising Newcomer for his work in 'Tea For Two'. He might be best remembered for the role of cowboy Will Parker in the film 'Oklahoma'. He also directed many television series including 'I Dream of Jeannie', 'Star Trek', 'Hawaii Five-O', 'Starsky and Hutch' and 'Fantasy Island'. After 'Harum Scarum' wrapped Elvis gave him an autographed picture saying 'Someday we'll do it right'.

Writer Gerald Drayson Adams was educated at Oxford University in England. He worked as a literary agent and business executive. He specialized in action-adventure and western movies as well as TV series.

Mary Ann Mobley was Elvis' leading lady for 'Harum Scarum', the second of her two films with him. Previously, she was in 'Girl Happy' with Elvis and leading lady Shelley Fabares. Mobley was was born in Biloxi, Mississippi.

She was crowned Miss Mississippi 1958 and went on to win the title of Miss America 1959. She sang in the talent segment of the Miss America pageant, which started her television career singing on variety shows. She won a Golden Globe Award in 1965 for Most Promising Newcomer- Female along with Mia Farrow and Celia Kaye.

She has since had many roles in both film and television.

Michael Ansara played Prince Dragna. He was born in Syria of American parents. The family moved to the United States when he was two and eventually settled in California when he was ten. He originally planned to pursue a career as a doctor, but became involved in studying drama instead.

He started appearing in films in 1944, playing in such movies as 'The Robe', 'The Ten Commandments' among many others. It was his role of the Indian chief Cochise in the 1950's TV series 'Broken Arrow' that first made him widely known.

He was married for some time to actress Barbara Eden, who, early in their marriage, worked with Elvis in the film Flaming Star and later became best known as the star of the 'I Dream of Jeannie' television series Ansara directed and appeared in episodes of 'I Dream of Jeannie'. You might remember him as the Blue Djinn who placed Jeannie in the bottle to begin with. In recent years he has had a role in three of the Star Trek film series, 'Star Trek: The Next Generation', 'Star Trek: Deep Space Nine', and 'Star Trek: Voyager'. His is also the voice of Dr. Victor Fries/ Mr. Freeze in the animated 'Batman' series.

The famed 'little person' Billy Barty played the mute pickpocket Baba. Mr. Barty was a prolific actor beginning his career at the age of three. A successful activist for the rights of persons of small stature, he founded The Little People Of America Inc. in 1957 and The Billy Barty Foundation in 1975. He was quoted as saying, 'The general public thinks all little people are in circuses or sideshows. We have doctors, nurses, just about every field covered'. Barty's acting credits are many and include a role in the Elvis film 'Roustabout'.

Julna the drummer was played by Jack Costanza, also known as 'Mr. Bongo'. He was a dancer from Chicago who developed an interest in bongos while visiting Africa. He worked in the 1950's with Stan Kenton's jazz band and eventually played percussion on hundreds of jazz, big band, and Latin recordings.

The dancing girls were Sapphire, Amethyst and Emerald were played, respectively, by Gail Gilmore, Wilda Taylor and Brenda Benet. Ms. Gilmore did not continue in movies. Ms. Taylor had dancing roles the Elvis films 'Roustabout' and 'Frankie and Johnny'. Ms. Benet was a dancer and actress probably best recognized for her role of Lee DuMonde on the TV show 'Days Of Our Lives'. She was married for a time to actor Paul Petersen and then to actor Bill Bixby, who co-starred with Elvis in two films - 'Speedway' and 'Clambake'. Tragically, Ms. Benet committed suicide in 1982 due to grief over the sudden death of her six-year-old son Christopher Bixby. 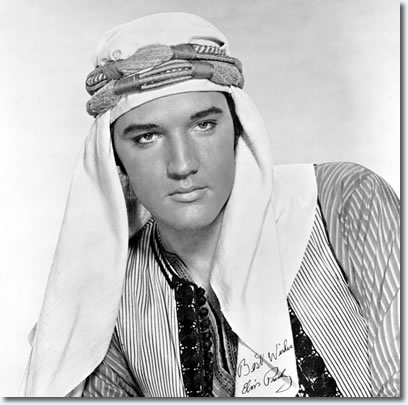 It was while filming 'Harum Scarum' that Elvis began in earnest to pursue his spiritual studies. When the film wrapped, Elvis presented the cast and crew with watches that he had Harry Levitch, one of his favorite jewelers, design. It featured both a cross and a Star of David and symbolized for Elvis 'universal brotherhood'.

Behind the Scenes of Harum Scarum

With a shooting schedule of only 18 days, Harum Scarum was a no-frills production with little time or money to spend on props, costumes, or set design. Little if anything was actually purchased or designed for the film, a not uncommon practice for low-budget productions.

The temple set had originally been built in 1925 for a Cecil B. DeMille silent feature called King of Kings. The costumes worn by the extras in Harum Scarum had been used in the 1944 version of Kismet and then retailored for the 1955 musical remake. Even the dagger carried by Elvis had been used in an earlier adventure film, Lady of the Tropics. Little effort was invested in the script, and the plot was thrown together following the same Presley formula. How bad was it? The Colonel suggested adding a talking camel to the storyline, which was seriously considered for a time before it was mercifully dropped.

So Close, Yet So Far (From Paradise) (Byers)