Elvis Presley's ninth movie was 'Follow That Dream' which opened nationwide on May 23, 1962 and peaked at #5 on the Variety Box Office Survey. The location shots for 'Follow That Dream' took place in July and August of 1961 near Crystal River, Ocala, Inverness, and Tampa Florida. Elvis arrived by chartered bus and stayed at the Port Paradise Hotel in Crystal River. Following behind the bus in Elvis' limo an pulling his new ski boat were his friends/entourage members Alan Fortas and Lamar Fike.

'Follow That Dream' was based on Richard Powell's 1957 novel 'Pioneer, Go Home', the story of the Kwimper family, who homesteaded on land along a newly built highway in Florida. In a deviation from his usual musical comedy character, Elvis Presley was Toby Kwimper, a L'il Abner-type in a family of bumbling rural Southerners. The Kwimpers, consisting of Pop, Toby, and several adopted orphans, claim squatter's rights along an unopened stretch of highway and open a small business renting fishing equipment. Gamblers attempt to take advantage of the Kwimpers' trusting nature.

The social worker Alicia Claypoole, played by Joanna Moore, investigates the Kwimpers' situation to determine if the children are receiving proper care. Alicia's attention to Toby angers Holly Jones, played by Anne Helm, who has been in love with the handsome young man since childhood. After Toby declines the social worker's amorous advances, Alicia attempts to take the children away from Pop Kwimper. Toby and Pop plead their case in a comic courtroom scene, and the judge decides in their favor. 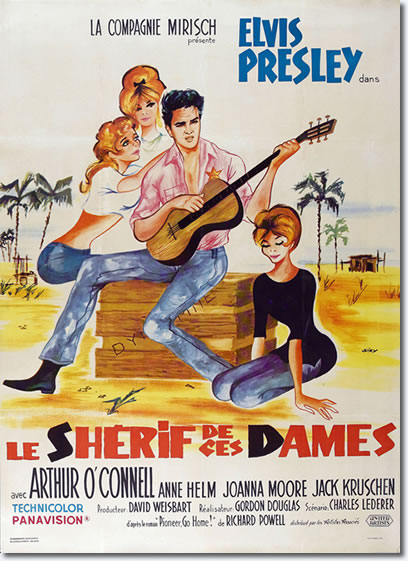 Elvis played Toby Kwimper, who had an unique method for avoiding amorous women and tempting situations - reciting his multiplication tables. In 'Follow That Dream', as with many of his films, Elvis worked with some of the best talent in the movie business.

Arthur O'Connell played Pop Kwimper. The family patriarch believed he was helping the government by taking advantage of their various assistance programs. Mr. O'Connell would play Elvis' father again in the 1964 film 'Kissin' Cousins'. He was nominated for an Academy Award as Best Supporting Actor in the 1955 film 'Picnic' and again in the 1960 film 'Anatomy of a Murder'.

Anne Helm played Holly Jones, one of the women interested in making Toby forget his math. Ms. Helm, a native of Canada, moved to New York at age 14, studying ballet and beginning to model. Eventually, she moved to California and worked in numerous TV series and in movies such as 'Desire In the Dust', 'The Magic Sword' and 'The Interns'. She and Elvis dated during the filming of 'Follow That Dream'. 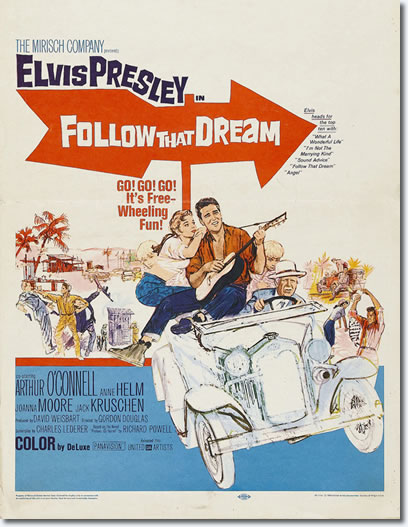 Joanna Moore played Alisha Claypoole, the state welfare supervisor who became vindictive when Toby remembered his math and rejected her. Ms. Moore married and divorced actor Ryan O'Neal, with whom she had two children - Oscar winning daughter Tatum O'Neal and son Griffin O'Neal. Moore had a long career with roles in TV series and movies. Some of the movies she worked in were, 'Ride A Crooked Trail', 'The Last Angry Man', 'Walk On the Wild Side' and 'Nevada Smith'. And Peg on 'The Andy Griffith Show'.

Roland Winters played the judge. You might remember his playing Elvis' father in the film 'Blue Hawaii'.

Howard McNear played George the bank loan officer. He was in two other Elvis movies. He played Elvis' boss at the tourist service office in 'Blue Hawaii' and he played Dr. Stevers in 'Fun In Acapulco'. He is best known for his role as Floyd the barber on the television series 'The Andy Griffith Show'.

Veteran character actor Herbert Rudley played Mr. Endicott, the bank president who took the Kwimper family under his wing and helped them start their business.

Several other veteran character actors portrayed the gangsters in this film. Carmine was played by Jack Kruschen, who was nominated for an Academy Award for his supporting role in the 1960 film 'The Apartment'. Simon Oakland, who played Nick, began in show business as a concert violinist, but he had a long career playing tough guys in films such 'West Side Story', 'Psycho' and 'Bullitt'.

The film was directed by Gordon Douglas, who began his career as an actor in the early 1930's, but was soon directing the 'Our Gang' series of movies for RKO. He also directed such films as 'Robin and the 7 Hoods', 'Harlow', 'Stagecoach', 'Tony Rome' and 'The Detective'.

The screenplay was written by Charles Lederer, whose writing credits include 'Ocean's Eleven', and 'Mutiny On the Bounty'. He was nominated five times for Writers Guild of America awards for his screenplays.

Producer David Weisbart also produced the Elvis movies Love Me Tender, Flaming Star and Kid Galahad. Leo Tover, the cinematographer, also worked on the Elvis film 'Love Me Tender'. Tover was nominated twice for the Academy Award for his work in films.

The executive producer was Walter Mirisch, who received an Academy Award for the 1968 film 'In The Heat of the Night'. He received the Golden Globe Awards' Cecil B. DeMille Award in 1977. In 1978, he received the Academy's Irving G. Thalberg Memorial Award and the Jean Hersholt Humanitarian Award.

Follow That Dream was filmed in sunny Florida, marking one of the few times a Presley feature was shot entirely on location. The head of the Florida Development Commission was pleased to have the film shot in his state, declaring, 'This movie will sell Florida around the world'.

Shooting on actual Florida beaches added a touch of authenticity to the movie, but location filming did give the producers minor headaches. The temperature soared passed 100 degrees one week, making it difficult on the cast, crew, and equipment. Elvis had to change his shirt 22 times in one day because he was perspiring so heavily. Another problem involved difficulties obtaining gambling equipment for a couple of scenes, because all gambling was illegal in Florida in 1961. One day, a local politician and a couple of anonymous gamblers just showed up on the set with the necessary equipment. No questions were asked.

The song A Whistling Tune was dropped from this movie, but later re-recorded and used for the film Kid Galahad. Elvis disliked the song 'Sound Advice' so much that he requested it be left off the soundtrack EP. It turned up later on the non-movie album 'Elvis for Everyone' in 1965.

Inside Follow That Dream: Fans Remember: On The Set With Elvis