Elvis' twenty-fifth film was the 1967 United Artists movie 'Clambake', a story perhaps inspired by Mark Twain's 'The Prince and The Pauper'. In 'Clambake' Elvis plays the rich young Scott Heyward, who trades places with the poor but happy Tom Wilson, played by Will Hutchins.

Scott is eager to be accepted for himself and not his money, while Tom seeks to know the lifestyle that money can bring. The beaches of Florida are the setting for 'Clambake' and the movie culminates with the running of the Orange Bowl International Power Boat Regatta. Actual footage from the January 1967 race was used in the movie. In the actual race the 'Scarlet Lady' was owned and raced by Jim Stough of Florida and the 'Raw Hide' was owned and raced by Lou Brummett of California. The 250-mile race was held at Miami's Marine Stadium, which was built for boat races, concerts and firework displays. The stadium was closed in 1992 after being severely damaged by Hurricane Andrew. The location scenes in Miami were done with doubles for the actors, and Miami water ski champion Jim David was used for stunts. All of the actors' scenes were filmed in California. 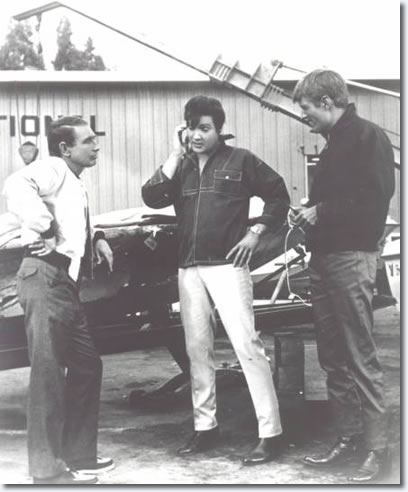 Gary Merrill, Elvis & Will Hutchins on the set of Clambake

When Elvis Presley became interested in something he typically immersed himself in it completely. Such was the case when he developed an interest in riding horses in the 1960s. He bought horses and equipment for himself and the members of his inner circle. Soon, the barn and pastures at Graceland were too small for the operation, so Elvis bought a ranch in nearby Walls, Mississippi and dubbed it the 'Flying Circle G' ('G' for Graceland). Elvis and the gang then spent a lot of their time there. Elvis had grown frustrated with his film career and the ranch was a welcome diversion for him. In February 1967, while Elvis and his friends were doing their cowboy bit, it was very hard for his manager Colonel Tom Parker to get Elvis to leave the ranch to make his twenty-fifth film, which was the United Artists movie 'Clambake', originally titled 'Too Big For Texas'.

Colonel Parker, knowing of Elvis' disenchantment and concerned about his disinterest, was making an effort to get the studios to improve their scripts. In correspondence he was working to get them away from the 'bikini girls, nightclubs, etc'. formulaic approach to Elvis' films.

However, for now he needed to persuade Elvis to honor his existing contracts and make 'Clambake'. There were numerous delays and finally Elvis, dressed in his cowboy chaps, came to soundtrack recordings in Nashville on February 23, 1967.

Elvis flew home on the 25th, making sure the pilot flew over the ranch. By the 26th Elvis' saddle sores caused yet another delay in filming. On March 5, 1967, Elvis was feeling better and left for California. The next day he reported to the studio where he met with the producers and the director and finished overdubs on the soundtrack. (Tirivia note: Jordanaires member Ray Walker provided the vocal for Hutchins's onscreen duet with Elvis.)

The film's editor Tom Rolf thought the song 'How Can You Lose What You Never Had' was the best song recorded for the movie but couldn't find an appropriate place for it to fit into the story line of the film, but he requested that it be included on the album. 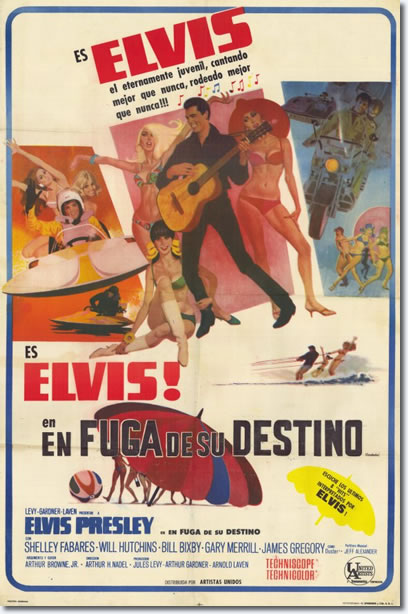 Elvis and Priscilla Beaulieu were married on May 1, not long after this film was finished. As a bonus item for fans, the soundtrack album contained a color photo from the wedding.

At his home in California, Elvis suffered a slight concussion on March 9, 1967 when he tripped over a TV power cord and fell during the middle of the night. This pushed start of production back to March 20, 1967 when he was well enough to start rehearsals. Principal photography began on March 22, 1967. The movie wrapped by April 27, 1967 and it opened on November 22, 1967, reaching #15 on that week's 'Variety' magazine film list.

Elvis' leading lady for this movie was Shelley Fabares, one of his favorite actresses to work with. This was their third film together, having previously worked together on 'Girl Happy' and 'Spinout'. She had achieved stardom as cast member of "The Donna Reed Show" before getting into movies. A big highlight of her career was co-starring in the TV series 'Coach' in the 1990s. However, she recently appeared on a reunion special celebrating the hit 1970s/80s TV series 'One Day At A Time', in which she had a supporting role.

Supporting actor Will Hutchins had also worked with Elvis in 'Spinout'. He has starred in his own TV series 'Sugarfoot' and has traveled the world on various other projects. His varied career includes a number of years working as a circus clown. Hutchins has more recently been working behind the scenes at NBC. 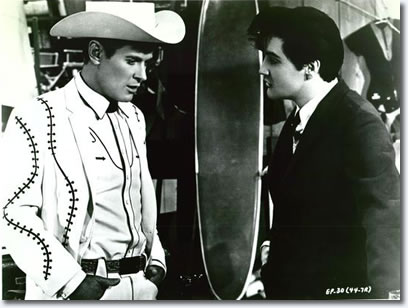 Actor Bill Bixby played Elvis' competition for both the girl and the speedboat race in the film 'Clambake'. Bixby, a sixth generation Californian who grew up in San Francisco, had a lifelong interest in acting. He studied law for a while at the University of California at Berkley, but three credits shy of graduation, he moved to the Los Angeles area where he began doing commercials and modeling work. Best known for starring in several TV series including 'My Favorite Martian', 'The Courtship of Eddie's Father', 'The Magician' and 'The Incredible Hulk', he also was a producer and director. He directed a 1993 TV movie entitled 'The Woman Who Loved Elvis'. He had been directing the TV series 'Blossom' in 1993 when he lost his battle with cancer and died. He was an accomplished painter and magician. He once recalled that on the set of 'Clambake' there were the usual practical jokes with Elvis and his guys, but that Elvis was also very fascinated by an album of recitations by Charles Boyer called 'Where does Love Go?' and played one particular piece over and over for everyone. It was 'Softly As I Leave You', which, years later, Elvis would add to his 1970s concert shows. 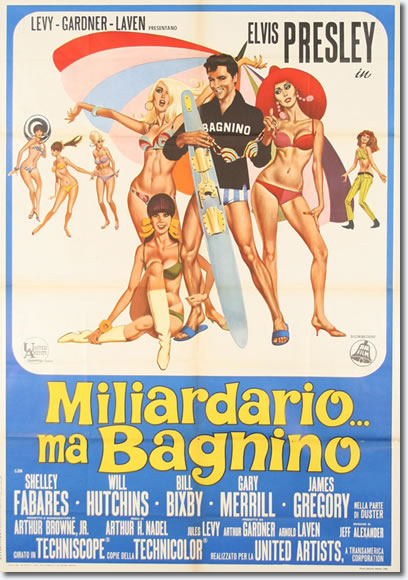 Watch for several of Elvis' entourage in this film: Joe Esposito plays a garage attendant; Red West is a playful ice creme man; Charlie Hodge is a barber; and Richard Davis plays a bartender.

Bloopers: The film is set in Florida, but the actors's scenes were all shot in California. Scott Heyward (Elvis) and Dianne (Shelley Fabares) enjoy a beautiful sunset over the ocean. Whoops! This scene is supposed to be in Florida near the Atlantic ocean, although it was actually shot on the west coast near the Pacific.

The sun sets in west over the Pacific ocean, but a sunset over the Atlantic is depicted in this film. And those pesky California mountains keep popping up on the Florida skyline, first at the gas station and then as Scott and Dianne drive along the Florida coastline admiring his oil wells.

The producers were Arthur Gardner, Arnold Laven, and Jules Levy. These three men met in 1943 when they were serving in the First Motion Picture Unit if the Army Air Force. They along with others such as Captain Ronald Reagan, Captain Clark Gable and Lieutenant William Holden were making training films. Gardner, Laven and Levy decided to form their own production company after their discharge from duty. 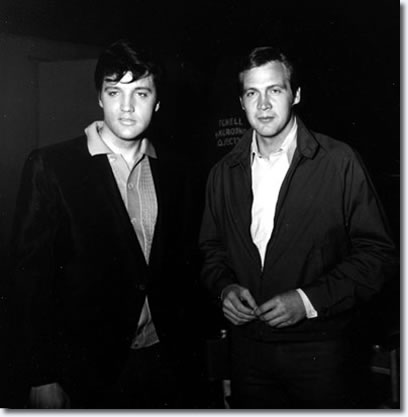 Behind the Scenes of Clambake

Clambake was plagued by misfortune and chaos even before shooting started, and much of it was due to Elvis' total disinterest in doing the film. Depressed at being forced to make another zany musical comedy, Elvis experienced a major weight gain. United Artists demanded he take off the extra poundage. On the first day of scheduled shooting, Elvis slipped on his bathroom floor and hit his head. After a private conference with the Colonel, the doctor declared that Elvis had suffered a concussion and could not work. Shooting was delayed for more than two weeks. Bored with his films, Elvis and the Memphis Mafia resorted to crazier and crazier antics with each production. By the time Clambake rolled around, the group seemed out of control. Pie-throwings, firecracker fights, and water bombardments on the set were a common occurrence. MGM sent down a memo just before the shooting of the next Presley film, Stay Away, Joe, warning the group about their behavior.

A House That has Everything

How Can You Lose What You Never Had

Elvis and Dolly Take a Road Trip - In a broadcast television first, Tennessee music superstars Dolly Parton and Elvis Presley meet on screen to promote their home state. The newest commercial from the State of Tennessee's Department of Tourist Development features Dolly Parton riding alongside Elvis in a digital scene recreation from the 1967 Elvis film, Clambake.